Vijay began his career with Citycare Property in 2018 as a line marker.

“Then, around three years ago the company placed its faith in me and tapped me on the shoulder to become a Cricket Technician, even though I didn’t have any prior experience.”

Since then, Vijay has proved himself to be a quick study on the finer techniques of pitch maintenance and will soon complete his Level 4 Turf Management certificate.

“Winning the award was a surprise but really it was very much a team effort, working alongside the mowing team; line-marking team and management team, and I am very grateful for all of their support. 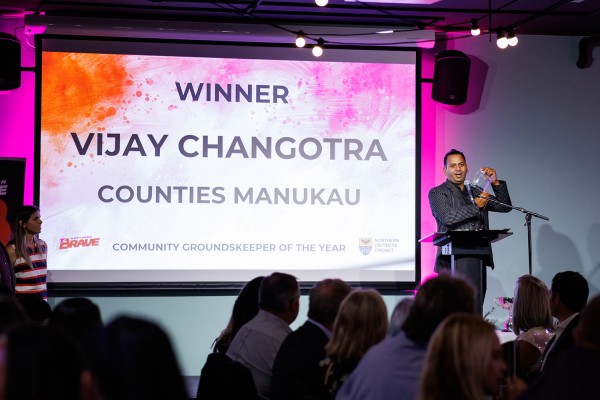 Vijay accepts the award for Community Groundskeeper of the Year at the 2022 Northern District Cricket Association Awards.

“Mountfort Park is a very busy sports facility with more than 80 matches played during the season including everything from grade matches right up to premiere league. Maintaining the blocks can be very challenging, for a number of reasons — particularly the weather and incidences of vandalism.

“The weather can be a major challenge to the job. If a pitch is too wet we need to dry it out, if it’s too dry we need to irrigate – it’s a constant balancing act.”

It’s not just a seasonal job either. Pitch preparation begins in September, with it taking around 20 days to get a pitch ready for play. There are also preparations carried out during the winter months, as well as the ongoing chemical and fertiliser programme.

Despite the pressures of the job, Vijay says the award has only reinforced his passion for the role. 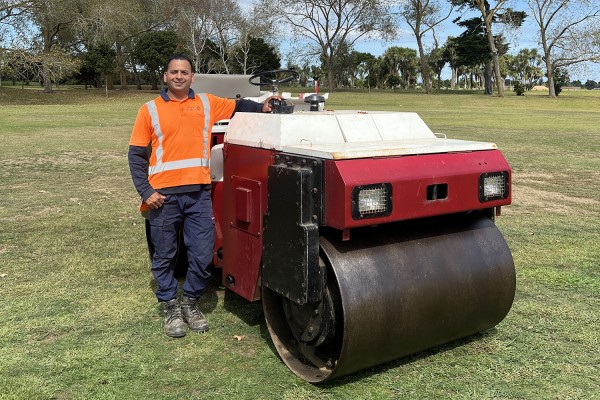 Vijay on the job at Mountfort Park, Manurewa, preparing one of 20 pitches for play.

“The best thing about winning this award is that it has made me more confident for the upcoming season. I used to play when I lived in India, and my 10-year-old son also plays, so I know what makes a good pitch. My philosophy is, we need to provide all players with the best pitches we can — every player is a future Black Cap!”

“I’m very conscious of seeing opportunities for clubs and players, that’s why I always prepare a stand-by pitch each week. I’m very proud of the fact that no matches have had to be cancelled due to the actions of Citycare Property staff.”

Whilst assessing Vijay’s nomination, the judges noted: “Since having moved to Mountfort Park, Manurewa, he has already had an impact in bringing life back into some of our quality strips. Despite the local challenges Vijay faces in his job, he still maintains an optimistic view on what he can deliver and often goes above and beyond what is required.”

History comes full circleLocated a 45-minute drive east of Christchurch on the Banks Peninsula, Little River is a small, rural town with a big history. Established in the 1800s, Little River had two primary industries, timber and farming.