Labourer-operator Georgia Grice stands out as a female working in a non-traditional role for Citycare Property and she’s keen to support young women who are motivated to work in the physical and practical side of the construction industry she loves.

Georgia completed her landscaping apprenticeship with Citycare in Christchurch from 2015 to 2018 and she’s now working in Citycare Property’s Structure Team.

“I believe drive and determination are the key attributes for young women undertaking apprenticeships and continuing to work in construction,” she says.

Much of Georgia’s day is spent driving a truck to and from project sites, delivering materials for the projects the team are undertaking.

“It’s still a rare sight to see women driving trucks and working in construction crews – I think it takes a determined personality, perseverance and a thick skin to succeed,” she says.

“I have always been hands on with everything in my life and I think I was destined to be working outside and doing a physical job, which is not something that appeals to many women I know.

“I expect to be treated the same as my male colleagues and I earn respect through my work ethic,” Georgia says.

“For me, it’s all about self-assurance, being persistent, not giving up, not being easily offended, and being enthusiastic to learn from experienced people around me.”

Georgia attained her Heavy Traffic Class 2 licence and licence endorsement for Heavy Plant such as rollers, loaders and diggers so she could perform more duties on sites and have more responsibility.

“As a woman on site, I’m more visible in a traditional men’s environment and with curious eyes on me I’m conscious of being a role model for health and safety,” Georgia says.

She believes having a female in the team adds a special dynamic in terms of supporting and caring for everyone’s wellbeing.

“It’s important to me to foster younger women in landscaping and construction roles as there’s great satisfaction to be had from succeeding in a non-traditional role,” Georgia says. 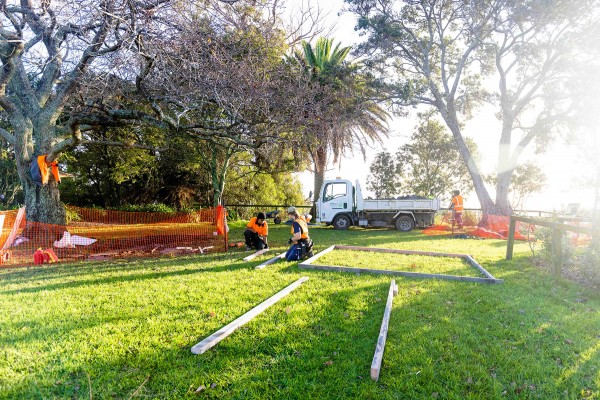